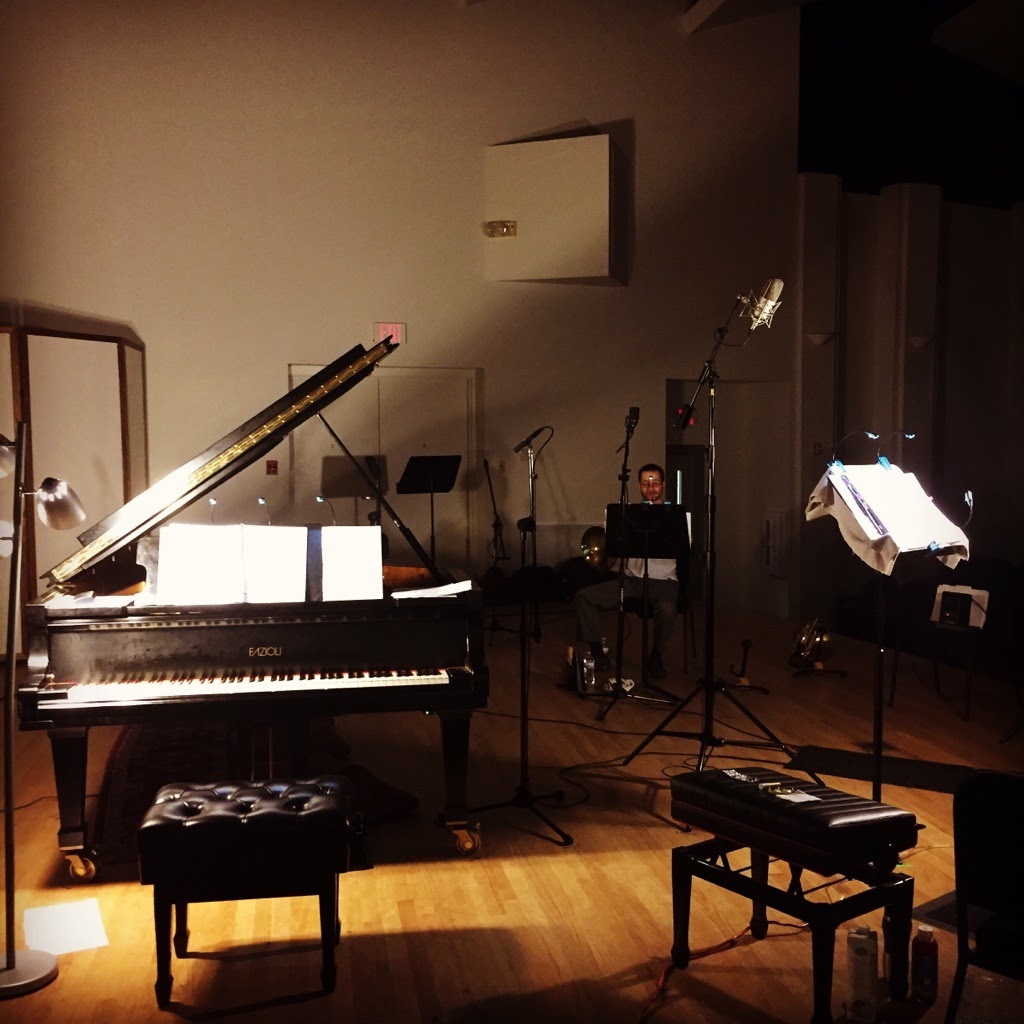 As mentioned in an earlier post, one of my big projects this summer was recording several works for soprano, horn, and piano for a forthcoming album of music by Eurico Carrapatoso. I’m pleased to say that we recently wrapped up recording, and I thought it would be good to share a few observations about the process while details are still fresh in my mind. Thank you to my colleagues Claire Vangelisti and Richard Seiler for inviting me to participate in this project, and Bravo on your inspiring work!

Engineer/Producer: We were very fortunate to be able to work with engineer and producer Richard Price of Candlewood Digital on this project. Mr. Price has a fantastic reputation, and even if 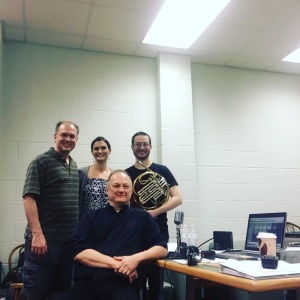 you don’t recognize his name I would be willing to bet that you own or have heard his recordings. I had not worked with Mr. Price previously, but after two solid six-hour-plus days of recording, I would recommend him to anyone without reservation! His incredibly discerning ears and easy-going demeanor made him a joy to work with as a producer and engineer. While I don’t know the exact technical aspects of what he did with microphone placement and other variables, I do know that the sound he was able to capture was great – warm and nuanced, with exactly the right balance among all three parts. And this was just from the raw takes! The final edited and mastered recording should be really fun! See below for a few shots of the stage setup. 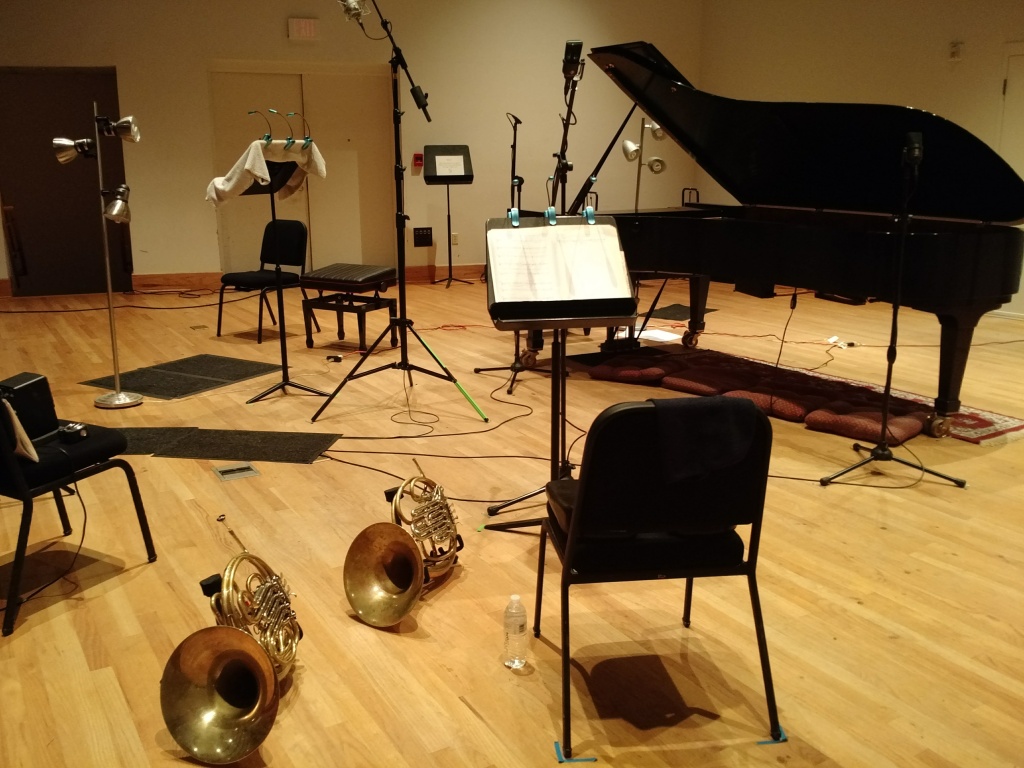 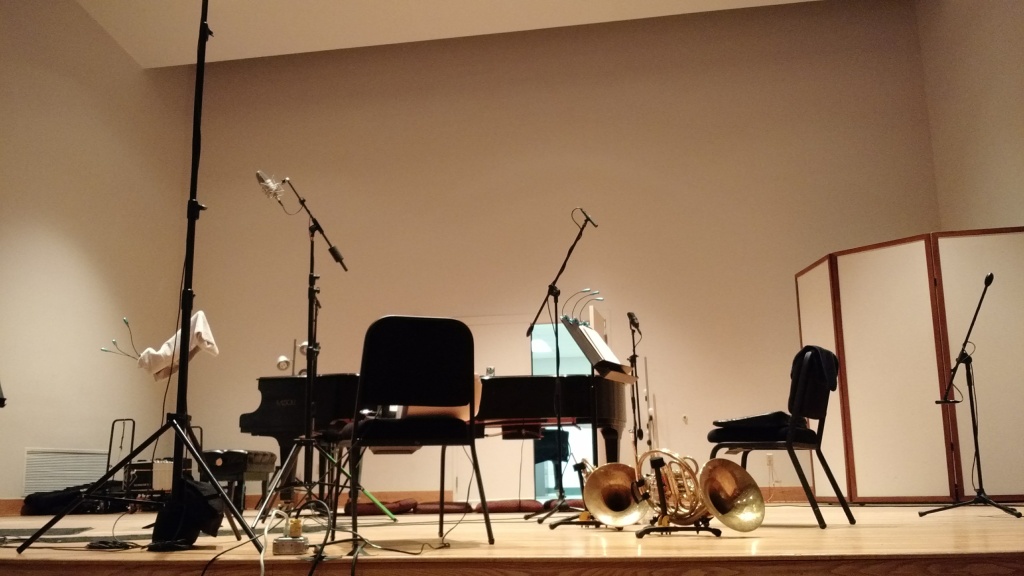 Horns, Endurance, and Rehearsals: As I’ve mentioned before, much of this project emphasized high and light playing, for which I used an older Paxman Model 40M double descant horn. My sincere thanks go out to Craig Pratt for the generous loan of this fine instrument! There were a few movements on which I used my regular Yamaha 671 double horn, but the majority of the playing on this album is on the Paxman. In my preparation for the recording sessions I focused on familiarizing myself as much as possible with the tendencies of the instrument, as well as getting creative with some different fingering choices.  Despite the intense schedule (on both days we did a 3-hour session in the morning, followed by a 2.5 hour break, and concluded with another 3-hour session in the afternoon, plus about another 30 minutes on a third day to wrap up some minor things), my endurance held up well. For those that might be interested, I believe this success can be attributed to a few different factors:

Final Thoughts: Recording a classical album can be a grueling process, and the bar for technical perfection and artistry is extremely high. High quality microphones and a great producer will quickly expose any and all weaknesses in your playing! I’ve always found it a humbling yet enjoyable experience, though distinctly different from the act of live performance. Though a major part of the work is now complete, the project is still a ways off from completion. Now comes the editing, followed by mastering and various other procedures involved in the production of a commercial recording. Be on the lookout for more updates in the coming months!

[…] vacation.” Coming right on the heels of a new music festival, an international conference, and a recording project, this resulted in  several back to back weeks of rehearsals and performances. In short, I’m […]

[…] Richard Seiler, and I recorded an album of music by Eurico Carrapatoso, which you can read about here. We were very excited to receive the first edit of the recording a few weeks ago, and are currently […]

[…] recorded twice before in our hall; first for a solo album with piano and harp, and next for soprano, piano, and horn. And although I’ve been performing in a brass trio for over ten years, this was really our […]