It’s very interesting to look at the way horn manufacturers market their instruments – just check out any issue of The Horn Call to see the various approaches to selling horns.  As I was going through some old materials in my file cabinet I came across this publication from United Musical Instruments (UMI), the company which used to manufacture and distribute Conn instruments.  UMI is no longer around, having  merged with the Conn-Selmer company, which is itself a subsidiary of Steinway Musical Instruments. 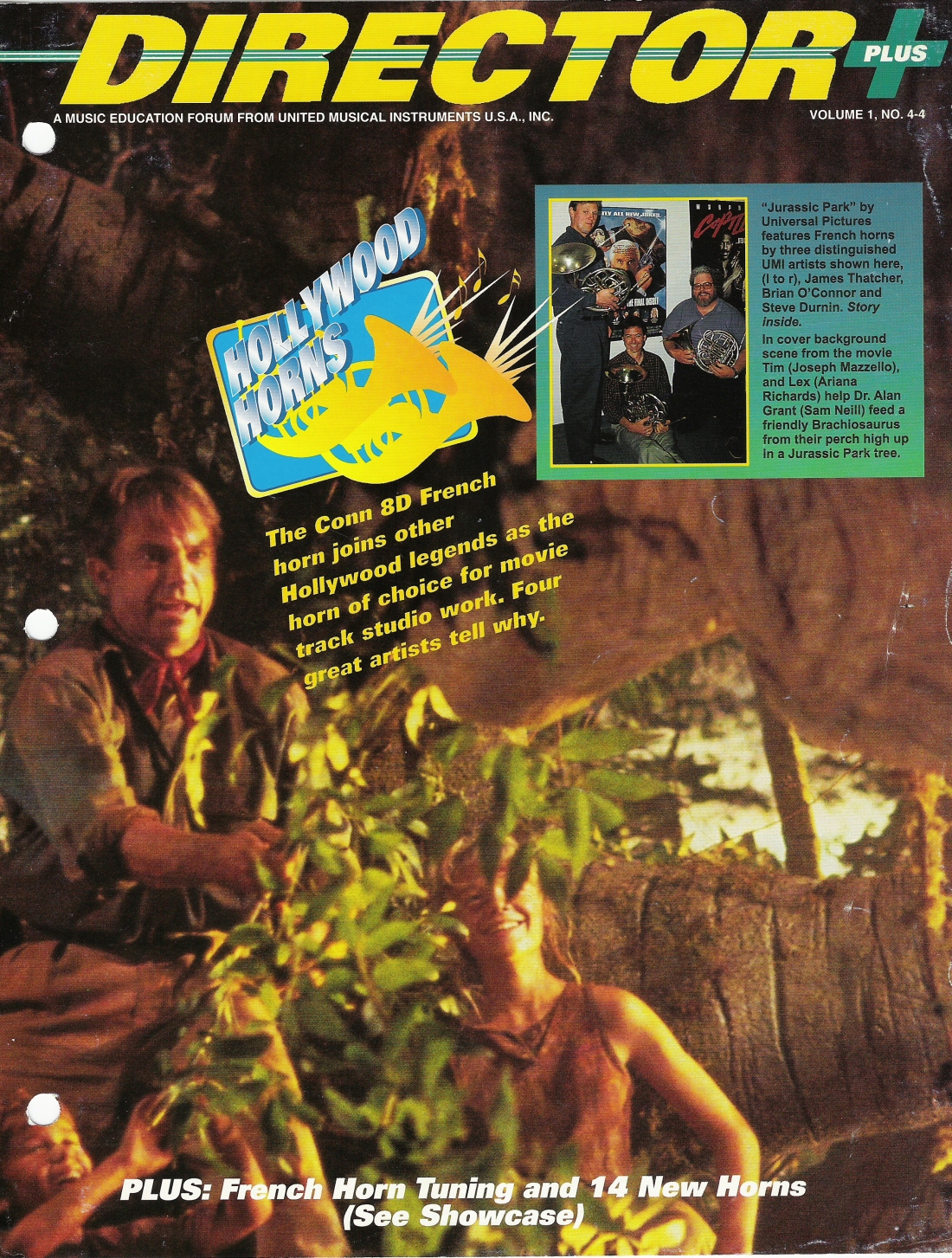 The brochure is part of a series called “Director Plus,” which was mailed out to band directors and other music educators as both informational and promotional material.  The cover is a screen shot from the 1993 Universal Pictures film Jurassic Park, a movie nearly every high school student (and probably band director) would have been familiar with at the time.  There is a good bit of promotional writing for the Conn 8D, but also some very nice interviews with Hollywood studio players Vince DeRosa, Jim Thatcher, Brian O’Connor, Rick Todd, Jim Decker, and Steve Durnin.  In the section quoted below, Vince DeRosa discusses how the 8D became such a popular instrument among LA studio players.

DeRosa can be credited with bringing the Conn 8D into the studio.  When asked about this time period, Vince recalled “We were all playing European horns. There always seemed to be a lot of intonation problems with these horns. It wasn’t until the 1930’s when Arthur Berv was in Los Angeles, on tour with the Philadelphia Orchestra, that I heard a Conn 8D. I bought a Conn 8D from a horn player who used to play with the Kansas City Philharmonic and began to fool around with it at home. Eventually I brought it to work and have been playing a Conn 8D ever since.  Composers began to write solos in the lower range and the 8D handled them with no problem.

The brochure goes on to interview the other players listed above about their work in the studios, ending with this very nice bit about their contributions, followed by one last plug for the 8D.

Jim Thatcher, Brian O’Connor, Rick Todd, and Steve Durnin, among others, have all shared the intense desire to be television and film studio musicians.  As such, they are the most heard horn players in North America, and probably the world. They have accepted the responsibility of continuing the high standards set by Alfred Brain and the still-very-active Vince DeRosa. Their horn is the Conn 8D; the horn that allows them to “go for the fence,” as Brian O’Connor puts it.  With their Conn horns, these players are confident that every time someone goes to a movie theatre, turns on their television or uses a VCR, the music will reflect these musicians’ dedication to performing their absolute best.

As a young player in high school I loved reading these kinds of publications – they inspired me to practice and gave me an idea of what the career possibilities were for horn players.  The advent of internet marketing has cut down and may eventually eliminate these kinds of informational/promotional publications, but for me they were an important part of my musical upbringing.