As an undergraduate I wasn’t a huge fan of modern music for the horn, but studying with Douglas Hill at the University of Wisconsin-Madison for my masters and doctoral degrees definitely opened my mind and ears to the range of sound possibilities on our instrument.  Professor Hill has been a lifelong champion of new music, and I think one of the best of his several solo recordings is A Solo Voice, released in 1987 by GM Recordings. 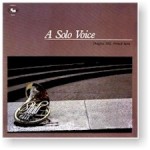 This album is devoted to 20th-century works for unaccompanied horn, and contains several interesting pieces.  Unfortunately, A Solo Voice is not available on CD, but you can find it on LP in university libraries and perhaps purchase a used copy online.  I got mine directly from Professor Hill, who had a cache of them in his studio.  The highlight of this album is Hill’s Jazz Set, a four movement extravaganza of extended techniques in jazz style.  To hear the composer perform his own work is a fabulous resource, and proves that everything written in the Jazz Set is in fact possible and more importantly musically convincing.  Verne Reynolds’ Elegy for Solo Horn is another work to which the soloist has a direct connection, as the piece was written for and premiered by him.  There are now several recordings of this work available, but this one is a must-hear for anyone working on the Elegy.  The other side of the album contains two studies from Gunther Schuller’s Studies for Unaccompanied Horn, the Sonata for Horn Solo, Op. 101 by Avram David, and the Sonatine for Horn Solo, Op. 39b by Hans Erich Apostel, all of which are expertly rendered.  Avram David’s Sonata has also been recorded by Eric Ruske on his album Just Me and My Horn, another highly recommended album of solo horn music.