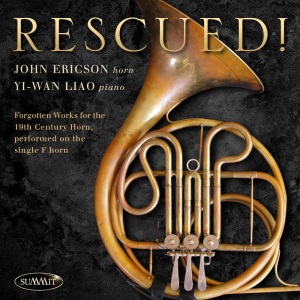 For today’s review we have a new recording by John Ericson, Rescued! Forgotten Works for the 19th Century Horn. Ericson is Associate Professor of Horn at Arizona State University, and is a recognized expert on horn history and the 19th-century horn in particular. I’ve been looking forward to this recording for quite some time, and have avidly followed Ericson’s series of articles related to this project on Horn Matters. The entire series is well worth reading, but to summarize, Rescued! is the culmination of Ericson’s research into the repertoire and technique of the 19th-century single F horn, which is often overlooked by modern horn players. The written description of the CD is as follows:

Most of the compositions on this recording will be new or at the least unfamiliar to a majority of horn players. And while the works presented here may not have been written by the “A-list” composers of the time, they are still high quality and worthy of study. The scores are all available on IMSLP for free, and I think that Ericson’s fine recording will help revive an interest in them. Any would be perfect additions to a recital.

I’ve heard Ericson perform numerous times, and both he and pianist Yi-Wan Liao are in top form on this recording. The technical difficulties involved in performing on the single F horn are daunting: mouthpieces, crooks, accuracy, intonation, etc. Yet Ericson plays with exceptional musicality, not to mention spot-on accuracy and intonation throughout the entire disc. As one might expect, the sound of the single F horn is reminiscent of the natural horn – warm and velvety in softer dynamics, with a bit of sizzle at forte volume. The piano sound is also quite warm, accentuating (without dominating) the horn sound. Most of the works emphasize the lyrical capabilities of the instrument, although the Eichborn Sonata and a few others contain some nice technical passages as well. Listening to this disc, one might assume that playing a 19th-century single F horn is an easy task – if you’ve ever tried it you know that isn’t the case! “Wolf” notes are more frequent and difficult to control than on the modern double horn, and achieving any level of accuracy requires great skill and an exceptional ear. Bravo to Ericson and Liao for releasing this fine disc!