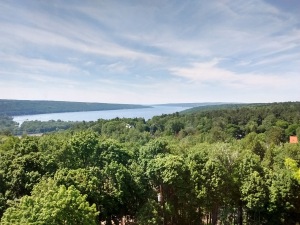 Now that the 48th International Horn Symposium is officially over, I have a few parting thoughts regarding the world’s largest annual gathering of horn players. First, a huge Thank You and congratulations to host Alex Shuhan and all the students, faculty, staff, and volunteers in the Ithaca College School of Music for putting together a fantastic week of events. Additional thanks should go to Nancy Joy, International Symposium Coordinator, and Rose French, Symposium Exhibits Coordinator, as well as the IHS Officers and Advisory Council. Horn players generally work well together as a team, and the IHS 48 team was no exception – Bravo! Here are a few more summary comments to wrap up this series on the symposium. (Feel free to read the entire series, beginning with Report No. 1)

Symposium Theme: The theme of IHS 48 was “The Natural Beauty of the Horn,” and this was honored in many performances, lectures, and other events throughout the week. There were outdoor Alphorn jam sessions, lectures on the Baroque horn and other historical topics, and some stunning natural horn playing (Pip Eastop, Jeffrey Snedeker, and others), to name just a few. The gorgeous natural scenery and tree-filled landscape on the Ithaca College campus created an almost pastoral backdrop.

Exhibits and Layout: As mentioned in an earlier report, all of the events for IHS 48 were located in two buildings: the Campus Center (exhibits) and Whalen Center for Music (performances and lectures). Navigation between the two buildings was very simple, but the sprawling layout of the Campus Center caused some initial confusion in locating all of the exhibitors. However, numerous signs posted by symposium staff helped point the way. By the end of the first day or so I had a pretty good grasp on where things were located – others were much quicker in figuring things out! As expected, all of the best instruments, equipment, and accessories were on display throughout the week. While sheet music and books were represented, my personal choice would have been to see a few more publishers and dealers in attendance. Perhaps digital downloads and the general availability of these materials online is having an effect? Difficult to know based on this one event.

Etiquette (Concert Hall and Exhibit Rooms): I am going to approach this topic delicately because one of the great things about the IHS symposium is that it brings together horn players from a wide variety of backgrounds, abilities, and interests. I am in complete support of this, and feel that the symposium experience should be as inclusive as possible. During these types of conferences there are multiple events going on simultaneously, and it is not unusual for attendees to visit one concert or lecture for a time and then sneak out to catch part of another one (or two). I have done this myself on numerous occasions, and it is generally acceptable so long as one enters or exits the hall during applause, not during a performance or between movements. For whatever reason, I noticed this happening quite a bit during the week, and it must have been a frequent enough occurrence for the symposium staff to notice because some signs were posted asking audience members to enter only during applause or to use a less obtrusive entrance into the hall.

The second part of this topic concerns Exhibit Room etiquette. I’ve not seen too much written about this, but there are a few rules to observe to ensure an enjoyable experience for all. I’ve listed them below in the form of a “Do” list. The “Don’ts” can be easily extrapolated, I think!

World Premieres: I already mentioned that IHS48 was a fantastic symposium for new music. The final total according to the program book was 14 World Premieres, although I suspect a few other works might also have been premieres but weren’t indicated. Many performers included both new and standard works on their programs, which made for well balanced concerts.

Stuff I Bought: I’m not really in the market for a new horn, but I did find a few useful items that might be of interest. Here’s a brief description of each.

All in all, IHS 48 was a great event, and I’m glad (as always) that I was able to attend. If you’ve never attended an IHS Symposium, consider making plans to attend the next one on June 26-30, 2017 in Natal, Brazil.

[…] feel, which fit very well with the city’s role as a cultural, artistic, and economic hub. IHS 48 in Ithaca was very different, given the beautiful natural surroundings of the Finger Lakes region in  New […]