Last weekend my wife and I took a day trip over to Shreveport. Our trip had two purposes: 1) shopping for some items we couldn’t find in Monroe, and 2) visiting Craig Pratt, a colleague and friend from the Shreveport Symphony. Craig has played with the SSO for a number of years, and is an active freelancer throughout the area. He also has an amazing collection of horns, mouthpieces, and other related equipment. Craig is generously letting me borrow his Paxman model 40M descant horn for some upcoming performances, which I picked up during our visit. More on the horn later, but first here are some pictures (posted with permission) of a few of the items in Craig’s collection. 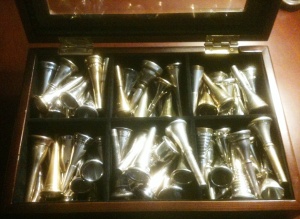 As for the descant horn, it is a great little instrument, and I am enjoying playing it. I had already planned to use my Holton H200 descant for some upcoming performances, but jumped at the chance to try out one of Paxman’s earlier Model 40’s, which in the opinion of many players are among the best descants around. Looking at the two horns side by side, it’s clear that they are based on a similar design – the Holton is on the left and the Paxman is on the right.

After playing on it for a few days, here are the differences I’ve noticed.

This is not to say that the Holton is a poor instrument, and for the price it would be hard to find a better entry-level descant. However, the Paxman was probably built to much closer tolerances, and plays like it. Hopefully I’ll be able to pick up a similar model on the used market in the future. In the meantime, my gratitude goes to Craig Pratt for the generous loan!

Have you played a the Yamaha descant? How does in compare with the Holton? I would imagine it would have better response, too, because it’s a smaller instrument.

And wow! So many mutes!

I’ve never played on a Yamaha descant, but have heard very good things about them. Richard Chenoweth at the University of Dayton is a big fan, I believe.

Yes…that’s a lot of mutes!

Thank you for the reference, I’m glad that someone is able to make use of what I’ve written.

The are several companies that make Harmon style mutes which are all slightly different sizes. It’s best to try a few to see which fits best. A Denis Wick bass trombone “wah-wah” mute fits my Holton H279 perfectly. I’d imagine that horns with small bells, like the descant horns you mention, would be better suited by a tenor trombone Harmon mute.

Thanks for your web site. Can you steer me to a source for older horn recordings. I studied at Julliard about 60 years ago and would like to find recordings that may still be in archive from that era. Thanks again, Jim Larkin.

Thanks for visiting! Probably the best place to look for recordings from that era would be either Juilliard itself (their music library, perhaps), or the New York Philharmonic Archives: http://archives.nyphil.org/

Silly question: What makes a Rittich mute a Rittich mute? Is it just the fully conical shape (compared with cone + cylinder of other mutes)?

Silly question: What makes a Rittich mute a Rittich mute? Is it just the fully conical shape (compared with cone + cylinder of other mutes)? Or is it something else?

I recently convinced my University to purchase a used Paxman 40M – it should arrive within the next week or so. I’m really looking forward to having it on hand for me and my students to use!

That’s awesome! The older Paxmans are very fine horns. I’ve not played one of the newer model descant horns, so I don’t really know how they compare. Hope all is well!