After a light schedule yesterday (Day 4) we began our series of performances and master classes in Thailand with a recital at Mahidol University. The performance went very well, and our audience – made up mostly of brass students and faculty from the College of Music at Mahidol – were attentive and receptive. We got lots of positive feedback after the concert, and also posed for this picture in front of the concert hall. Notice the large Thai ceremonial drum in the background. 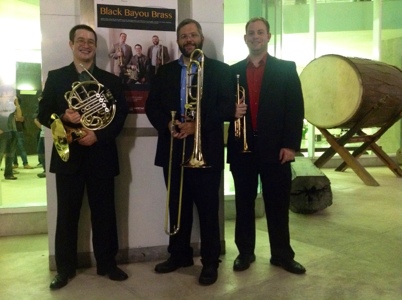 In addition, our trumpet player Alex Noppe presented a clinic on jazz improvisation earlier in the day to a room full of eager students. Though some of the students were more familiar with jazz, and the English language, than others, they all listened to Alex’s presentation with rapt attention. After learning the basics of jazz improvisation, many of the students did some improvising while Alex accompanied on the piano. 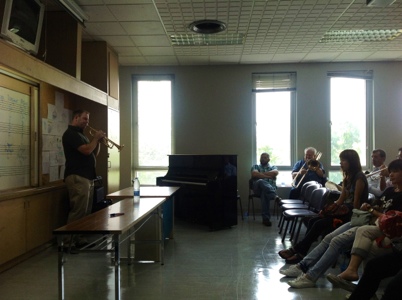 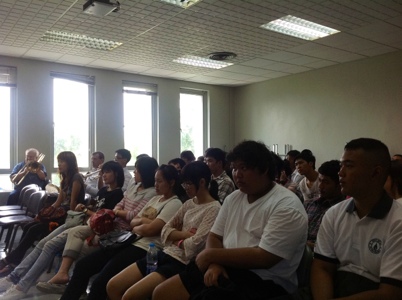 After a few hours rest it was time for our concert, which was held in the College of Music’s primary performance hall. I snapped this picture of the stage after our sound check. 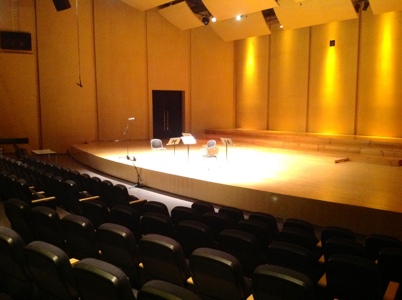 The venue had great acoustics, and it was easy to hear one another on stage. The performance came off well, and was broadcast on Thai public television. All in all, not bad for our first day of work! Tomorrow we will continue with individual instrument master classes in the morning. I’m very much looking forward to working with the horn players here, as I have heard wonderful things about them. We will also be treated to a performance by the horn ensemble Horn Pure, which has performed to acclaim at several International Horn Symposiums.