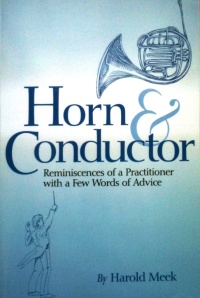 This subject of this week’s review is a book I knew very little about until recently.  I’ve read – and own – most of the major books on horn playing, but this little gem by retired Boston Symphony hornist and IHS Honorary Member Harold Meek (1914-1998) slipped past me until last year. The full title is Horn & Conductor: Reminiscences of a Practitioner with a Few Words of Advice, and it is available on Amazon for a reasonable price. This book is essentially a memoir of sorts about orchestral horn playing, based on the vast experiences of the author. It is divided into two main sections, the first containing an introduction along with short chapters on balance, horn players, and conductors, and a brief history of the instrument. The second half contains several “case studies” from the standard orchestral literature, including musical examples. The author discusses technical and musical issues the orchestral horn player often faces with each excerpt, providing suggestions for negotiating both types of challenges. These discussions usually include anecdotes – many of them humorous – about various conductors and their approach to each excerpt.  Meek’s writing is concise and fun to read, while still communicating lots of valuable information – both historical and practical. I could go on about Horn & Conductor, but I think a better introduction would be to include some short quotes from a few of the chapters.  These should give you a sense of the author’s style, as well as the scope and content of the book.

From the Introduction, a short anecdote about Anton Horner

Many years ago, Anton Horner, the great first horn player of the Philadelphia Orchestra – how rightly he was named ! – stood up during a rehearsal and told Fritz Reiner that the lips of the horn players could not stand the pressure to which he was subjecting them in demanding more and more forte. Later he went to Reiner, grabbed his thumb and squeezed it between his own thumb and forefinger until it turned red and blue, saying, “This is what happens to us – circulation is cut off, and the lips become numb.” The maestro rubbed his thumb and understood. [p. 2]

On audition committees, from a chapter titled The Applicant

There are those who see only something benign in the committee process. But it is unwieldy, puts everyone under enormous pressure, and it is totally unfair to expect that players fly from East to West and vice versa, getting off planes and playing for a group which, at that moment, can say “yes” or “no, you cannot play for the conductor.” They are apt to be wrong part of the time. After eight or ten people have played, the committee members often do not know who played what, or how. If conductors have no time to take full charge and care for this part of their responsibilities, perhaps orchestra trustees should begin to look for conductors who do. [p. 18]

Pierre Monteux said that no conductor should attempt to conduct without the score in front of him unless he knows and can remember every note of every instrument horizontally throughout the piece and every note of every instrument vertically throughout the piece. Some conductors are said to possess photographic memories of the score pages. I do not doubt that. But what I know is that too many do not produce much music from those pages–only notes. [p. 25]

By now I’m sure you’ve gotten a sense of Harold Meek’s style – he doesn’t hold back when it comes to his opinions on music and conductors! I’m not convinced that the relationship between musicians and conductors has to be as adversarial as described in some of his accounts, but nonetheless I think Horn & Conductor is a wonderful read, and worth adding to the standard books by Farkas, Schuller, Hill, Reynolds, and others. It offers a window into the life and mind of a horn player in a major orchestra, as well as personal anecdotes involving many of the 20th century’s most recognized conductors.

I studied with Harold Meek for 3 years at Longy School getting a BM in Applied Music.

Harold Meek, (Mr. Meek to yours truly) taught in a disciplined way the standard horn etudes.

He was technically and musically gifted to have reached the pinnacle of BSO.

However, the thing that set him apart in my opinion was the beauty of his tone that was rich with overtones that he got from his single B-flat horn. It was his opinion that it was easier to produce these tones on a single B-flat horn than on the full double horn. There was less tubing.

Perhaps there is a relationship here with his study and understanding of the natural horn and the hand horn.

These tones were centered, rich with overtones, mellow and penetrating in their own way. The best examples of this style of his playing to my mind are two: Opening to “Oberon” with Fiedler and the Pops; And, the third horn reply in the “Royal Hunt and Storm Music” of Belioz with Munch.

So, a sound different than big sound of the Conn 8-D however wonderfully it is played.
But, a beautiful sound based on simplicity and overtones.

Thanks very much for sharing!