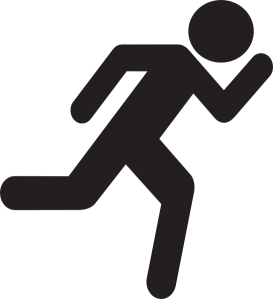 A few years ago I attended a master class presented by a well known brass soloist, and eventually someone brought up the topic of warming up.  The clinician asked the audience, “How many of you begin your warm-up with long tones?” Dutifully, most of us raised our hands – more or less assuming that this was a rhetorical question.  To our surprise his response was something like “actually I don’t recommend using long tones to warm up.”  Well, our faces must have shown what we were thinking, because he then gave the following explanation for why long tones might not be the best thing to do first thing in a warm-up.  He first noted that there are lots of parallels between music and sports, and then asked what professional athletes do to warm up. “Do they do this?”, he asked, and struck a pose like the image at the beginning of this post – a runner suspended in mid stride.  He then started jogging, and said, “no, they do this to warm up.”  The point I believe he was making is that he prefers a more dynamic way to start his playing day – not dynamic in the sense of volume – but dynamic in the sense of moving notes (dynamic) rather than held notes (static).

At the time I filed this bit of information away under the heading “hmm, that’s interesting.”  For that player it obviously worked fabulously, so there is definitely something to be said for using scales or other kinds of patterns in place of the traditional long tones in the warm-up.  However, after some more consideration, and looking at several (20+) warm-ups and daily routines for horn, I can also see the other side of the coin.  I too think there are many apt comparisons between music – particularly brass playing – and sports, and so I started thinking about how athletes warm up.  Yes, they often do some dynamic movements, such as jogging, jumping, or other types of calisthenics, but they also do this (see image at left).

To me, this type of stretching in place seems analogous to the use of long tones in a warm up.  One other thing to note about long tones is that they may seem static because the pitch stays the same for long periods, but in order to play them correctly the air has to stay in motion, not to mention any subtle movements going on at the aperture and inside the mouth.  If played incorrectly (too high/too loud), long tones at the beginning of the day could cause stiffness and/or lack of endurance later – perhaps this is what the clinician was getting at in his presentation.  However, I do think they can serve as a useful warm-up or re-warm-up if they are played in a comfortable range and at a medium dynamic.  It’s probably best to save the envelope-pushing long tones for later in the day. In looking at some of the standard (and not so standard) warm-ups for horn, I noticed that about 70% of them began with some type of long tone exercise, while nearly 100% included them somewhere in the routine.  Long tones are here to stay, but there is plenty of room for variation on when and how we practice them.  In the warm-up it’s especially important to find a pattern or set of patterns that works for you, regardless of what I or anyone else says. Whether you start the day with long tones, chromatic scales, or another kind of pattern, I encourage you to try something else every once in a while, just to see what happens.  Who knows, you might just discover a more efficient way to warm up.

I’m not keen on much in the way of long notes in my warm up. I tend to start out with slurred arpeggios relatively slow, one octave up and down using every possible key combination on both the F and Bb sides. It has the dynamic advantages you mention, but also since you’re not moving out of the middle range and can combine several arpeggios into a single breath, it has some of the benefits of long tone warmups as well.

Thanks for the comment Jonathan. I’ve gone back and forth over the years between using long tones in my warmup and other more active things. I definitely like to use scales and arpeggios later in the day for a re-warmup, as going through long tones again later seems to make my lips a bit stiff.

James – Reading and thinking about this post led me to a spinoff post of my own, which is also sort of tangential to your burnout post (which is very well done). Really appreciate your thoughts on the psychological aspects of music study.

[…] I’ve noticed some positive results over the past several weeks. To clarify, I normally play long tones in my warm-up routine, but it’s been a few years since I did any additional long tone work during the day. In […]