In an earlier post on my new Schmid double horn, I mentioned that these horns have a couple of other interesting features worth mentioning.  When I first got the horn, I sent an email to Dennis Houghton (who sold me the instrument) with a few questions – nothing major, just curiosity mainly.  Dennis replied promptly, and his answers were so great that I asked him if I could quote a portion of his message in this blog, and he kindly agreed.  See below for the details.

[Response from Dennis] A few years ago Engelbert changed his receivers to what he calls a “combination taper” – meant to work with either German or Amer mpcs… also, the Laskey mpcs do tend to work well with Schmid pipes anyway.

Not being a horn maker, I don’t entirely understand how this works, but I would imagine that the new combination taper is something of a compromise between the American and European.  Since I didn’t know about this new development when I ordered the horn, I went ahead and bought a European shank version of my Laskey 75G, a  Laskey 75Ge.  In the first picture  you can see both mouthpieces side-by-side. 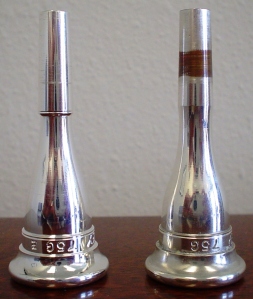 The 75Ge is on the left, and the 75G is on the right.  One thing to notice right away is the different shank designs between the two models.  Interestingly, though, the newer Laskey mouthpieces (both American and European) tend to have a similar design, but with slightly different dimensions.  The 75G on the right is about 4 years old, and they don’t seem to be making them with that particular kind of shank type anymore. It’s probably just a cosmetic thing.  In this next series of pictures you can see close up views of how both mouthpieces fit into the lead pipe of a Schmid horn.  First is the 75G (American shank), and next is the 75Ge (European shank) 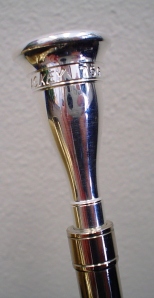 If you look very closely (click on the images for a larger size), you can see that the 75G appears to go into the lead pipe a tiny bit further than the 75Ge.  I don’t have a micrometer to make exact measurements, but my guess (?) would be that the difference is only a few millimeters.  The different shank designs also make the comparison more difficult to make.  At any rate, I’ve been playing with the 75G for the last several days, but I’m going to switch to the 75Ge for awhile to see if I notice any significant changes in response, intonation, etc.   I’ll post back later with any results, but in the meantime I would love to hear from my readers if you have had any experience with the newer Schmid “combination taper.” I’ve also contacted Engelbert Schmid for more details, and will report back when I hear something. And finally, if you want more information on European vs. American shank mouthpieces, check out this article by John Ericson on HornMatters.

Was wondering if you have had a response from Schmid? I have just purchased an E-Taper (Alex/European) PHC mouthpiece that doesn’t fit my double Schmid, although it fits my Alex 103 fine. Thanks

Yes, I did hear back from Meister Schmid, and he said basically the same thing Dennis Houghton did. The combination taper is designed to accommodate most mouthpiece shanks, although he did highly recommend his own line of mouthpieces, which are designed specifically to fit his lead pipes. In my own experience, the Laskey European model shank seems to fit just fine in my Schmid double.

Hi James, I just gotten a laskey with the newer shank non-e 775G. The difference on my Schmidt horn in shank distance is quite big compared to my 775J E.

Schmid horn, not Schmidt. Auto correct messed it up.