In a few short years, Romanian expatriate Ion Balu has become a household name among horn players because of his superbly crafted mutes. Recently he has expanded his work into mutes for other brass instruments, cases, valve covers, and now custom horns.  According to his website, the Balu horn will feature some twists on the conventional custom Geyer-style model.

The New Balu horn incorporates new and revolutionary ideas. The result of countless hours of designing and testing new and innovative ideas, the new Balu horn exceeds our playing expectations. Since the lead pipe is where the sound forms, my theory was that it must get a better sound if it has a wider wrap. Same on the f-branch. It is bent only in two dimensions, so it does not have a twist, so the sound projects better. The two slides are not parallel with the body if you look from the top, so I did not have to make two extra bends (twists), again helping with the sound. The higher version of the horn features an interchangeable leadpipe system, so the artist can easily choose from one of our 6 different leadpipes.

You can read more about the horn on the Balu Musik website, but the two most striking things  about it in my opinion are the unique configuration of the main and f tuning slides, and the “weathered, black finish” option. (See the picture below, obtained from http://www.ionbalu.com). 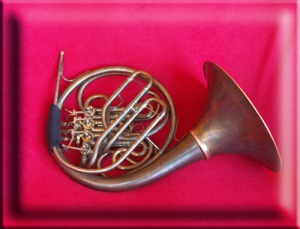 Apart from looking really cool, the angled slides play an important role in the horn’s construction.  Ion explains below.

By arranging the main and f-slide unparallel with the bell and f-branch, we avoided making two extra bends in the tubes, thus further improving the air flow. The f-branch now is bent only in 2 dimensions, as opposed to other Geyer wraps who have an extra twist.

In addition, Ion is offering the first 10 horns at an incredibly, insanely low price for the custom horn market (under $6000).  As an owner of two Balu mutes I can say that his craftsmanship is excellent, and the mutes definitely live up to their reputation.  I have no reason to doubt that the quality of his horns will be the same. Be on the lookout for the Balu Horn at upcoming horn workshops; it’s definitely one you’ll want to try. As an aside, I attended the Brevard Music Center with Ion in 1999 – which must have been during his first year in the U.S.  We played together in a couple of orchestras at Brevard.  At the time I believe Ion was playing an old Alexander 103, complete with leaky valves and the occasional taped-up pinhole leak.  In spite of  it all,  I remember him sounding great that summer.