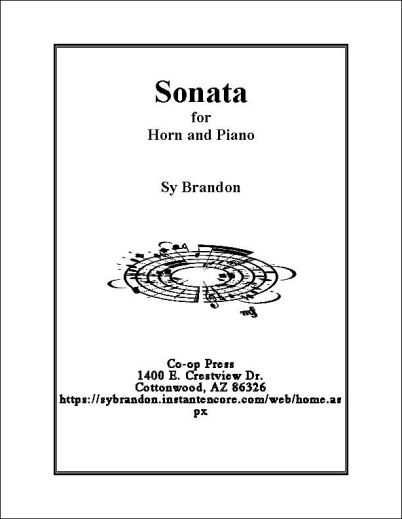 In 2018 I participated in a consortium to commission a sonata for horn and piano from Sy Brandon. I’m very familiar with his music, having recorded his Inventions for Brass Trio on our recent album Scenes from the Bayou.

Brandon’s music is fun for the performers and accessible for audiences, so participating in the consortium was a no-brainer. Part of the commissioning agreement was to perform the new work at some point after its completion, but other obligations have prevented me from programming it thus far. After our state’s stay-at-home order went into effect, I contacted Sy and asked him if he would be willing to provide me with an electronic realization of the piano accompaniment, as well as permission to record and share the piece on YouTube. While not the same as a live performance, I hope this rendition is representative of the work. Each movement was performed in its entirety, and the recording is unedited except for some added reverb and equalization. I hope you enjoy it!

More information about the piece can be found below the embedded video, including the names of the other consortium members and program notes by the composer.

Sonata For Horn and Piano, by Sy Brandon In Memory of David Baptist
Score and Part available at https://www.jwpepper.com/Sonata-For-Horn-and-Piano/11196472.item#/submit
Commissioning Consortium

Program Notes This three-movement Sonata was created in memory of my dear friend, Hornist, and composer/arranger, David Baptist. To read more about Dave, visit  http://todd.macshare.com/davidbaptist/index.html This work was created with the support of a commissioning consortium. The first movement is heroic in style as Dave was one of my heroes. He had so much talent and yet was very humble. He was one of the first friends we made when we moved to Arizona and his sense of humor was priceless. The movement is in a modified sonata form. The recapitulation begins with the secondary theme, then the closing theme and finally the main theme therefore creating an arch form. The second movement reflects Dave’s love of jazz. This bluesy movement uses a slight twist of the blues scale. Normally the lowered third is in the melody and the normal 3rd in the harmony. While this occurs in this movement, the reverse also occurs. The normal third is in the melody and the lowered third is in the harmony. Frequent use of both the normal and lowered versions of the 5th and 7th also occur. The form builds to a climax about two-thirds through before returning to the opening material. The third movement is in a modified rondo form. The 2/4, 5/8 rhythm of the A theme was inspired by my counting my vitamins in the morning to make sure that I had what I was supposed to take. I counted 1234 12345 which gave rise to the rhythmic pattern. The asymmetrical meter idea is carried over into the B theme where it begins with 4 measures of 5/8 followed by alternating 2/4 and 3/4. The character is similar to the A theme. The C theme is radically different and sounds more like a development with its repeated Horn notes and changing harmonies underneath. I am in the process of preparing Dave’s compositions for publication and observed that Dave used this technique frequently. After the C section the themes return as B followed by A and a coda.The odd meters, articulation, and dynamic surprises create a lighter, more humorous movement. -Sy Brandon