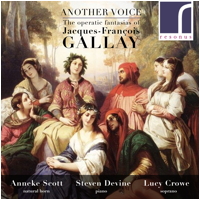 I recently received two wonderful new discs for review from Anneke Scott, a phenomenal performer on both natural and valved horns. Scott serves as principal horn of the Orchestre Révolutionnaire et Romantique and The English Baroque Soloists, and also performs frequently as a soloist and chamber musician. In addition to her busy performing schedule, she has also found the time to record several albums of music by the great 19th-century horn virtuoso Jacques-François Gallay. The third and final volume in this series is titled Songs of Love, War and Melancholy: The operatic fantasias of Jacques-François Gallay (read a review of the second album here.) As in her earlier Gallay recordings, Scott’s natural-horn playing is expressive, athletic, and robust; in short, very impressive! She negotiates even the most difficult passages on the natural horn with beguiling ease. The selections on this disc belong to a repertoire that was extremely popular during Gallay’s day, but is less known to modern horn players. Here’s a brief quote from Scott’s liner notes, which are copious and very informative.

During this period the opera fantasia offered virtuoso musicians the opportunity to demonstrate a number of aspects of their playing that were viewed as highly desirable by their audiences. The choice of themes, especially if Italian in origin, was à la mode and their settings offered the musician the opportunity demonstrate his amazing skills both in performing a melody in a vocal style as well as showing off with spectacular embellishments.

I think the same holds true today for these works, though they do contain plenty of “real” music, and not just virtuosic display. It is also interesting that while Gallay’s Op. 27 Preludes and Op. 57 2nd Horn Studies have become a standard part of the modern horn player’s curriculum, these equally (if not more so) substantial pieces remain more or less unknown. I was familiar with operatic fantasias for horn, mainly through Thomas Bacon’s edition and recording of C.D. Lorenz’s Fantasie, Op. 13, but I knew very little about Gallay’s contributions to the genre. One factor that probably contributes to this disparity is the difficulty in tracking down modern editions of these works. The Op. 46 Fantaisie sur ‘L’elisir d’amore’ can be found on IMSLP, and Op. 49 is available through Koebl, but I was unable to find either public domain or commercial editions of the other works. I contacted Ms. Scott, and she quickly responded with the following information.

Now, all the Gallay pieces are available but right now it’s a bit tricky. I published them as part of the crowdfunding for the original disc. (They’re all here: http://www.plumstead-peculiars.com/Index.html). But just what with one thing and another haven’t had the chance to set up selling myself. They will be available from www.corniworld.com (Sheet music) and www.devinemusic.com (downloads) I think from July onwards.

So, it looks like new editions of these will be available very soon. These are lovely pieces – especially the three works for horn, voice, and soprano – and would make excellent editions to any recital. 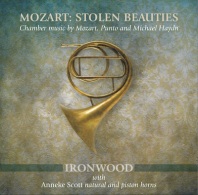 The second recording for review today is Mozart: Stolen Beauties, a collaboration between Anneke Scott and the period instrument ensemble Ironwood. Here’s a brief introduction to the album, again from Scott’s liner notes.

In this disc we take as our central point one of Mozart’s most memorable works for horn – the Quintet in E-flat major, KV407. Rather than choosing the more common path of combining this work with a number of other late 18th- and early 19th-century works for horn and strings…we have illustrated the various ways in which Mozart’s works have been ‘appropriated’ for the horn, or, in one case how Mozart ‘appropriated’ a work for himself.

The result of this novel approach to programming is an album full of obscure, but nonetheless beautiful, works for horn and various combinations of strings and piano. The exception is of course Mozart’s well-known Quintet, but the interpretation recorded here makes for very enjoyable listening as well. There is a freshness and presence to this album that rivals anything I’ve heard from modern instruments. Like the Gallay recordings, the liner notes are meticulously researched, yet pleasant and easy to read. Horn players will be especially interested in the recording of Michael Haydn’s Romance in A-flat major, which bears a striking resemblance to the Romanza movement from Mozart’s K. 447 concerto. Scott’s explanation and subsequent thesis regarding this peculiar work are quite convincing. I must say that after listening to both works back to back the Haydn seems more musically interesting! The music on this recording is a little more difficult to track down than the Gallay disc. Here are some additional details from Ms. Scott.

For the music on the Mozart disc it’s a bit more tricky. The Mozart quintet is quite easy to get hold of. I thought the Michael Haydn was as well but now looking for it it seems more tricky. We used a copy of the original edition – maybe I should do an edition of that myself? The Punto duets I found in a library in Russia and did my own edition which again I should make available through Plumstead Peculiars. I did the same with the Anon variation – these are available from Tanglewind Music – http://www.tanglewindmusic.com/Site/Historical_%26_Urtext.html. They’ve got the variations down as being by Puzzi which is a misreading of the manuscript, also the extra variation is missing from this edition.
The Kegelstatt though… I did my own edition for this piece so it’s kind of ready to publish but I’d like to do a lot of work on it first. There’s a lot of “textural” things in it – for example places where Livius obviously made a mistake (some strange viola figurations) which needed correction and other places where he deviates from the original Mozart. Eventually I would like to publish this but there’s a lot of information that I’d like to include so that performers have various options and can make their own decisions. Basically it needs a critical report. So it’s on the cards but I need to find the time to do it.

Also of note is Scott’s use of a hybrid instrument, a natural horn by Courtois Frères, Paris, c. 1835, with a removable set of piston valves (sauterelle) by Antoine Halary, Paris, c. 1840. She seamlessly combines both hand horn and valve technique in her recording of Mozart’s Concertante for pianoforte, horn, viola, and cello, arranged by Barham Livius.

On a related topic I’ll close with a general statement about Scott’s natural horn playing, which incorporates lots of different colors and expressive contrasts. There are varying schools of thought regarding hand horn technique, one of which emphasizes absolute evenness and consistency of sound between stopped and open notes. While there is merit to this approach, I personally enjoy hearing a difference in stopped and open timbres, especially when in the hands of a consummate musician like Anneke Scott. When performed tastefully, these contrasts add an elusive, but very important, quality to the music of that era. As a primarily modern (valved) horn player, I have been inspired by these recordings to strive for more expression and timbral variations in my own playing. I think you will as well!

Cool, thanks for reviewing, James. I had looked unsuccessfully for those Punto duets a while ago. Great to hear she may publish some of these works.

You’re welcome Roger – thanks for reading!