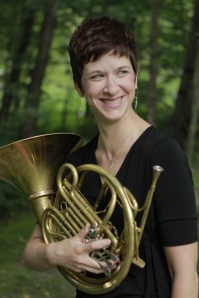 I recently reconnected over Facebook with Lauren Robinson, a friend and colleague from graduate school. I feel very lucky to have gone to school with some incredibly talented and hardworking musicians, who inspired me then and continue to inspire me today. Lauren currently lives in Denmark, where she plays Fourth Horn with the Aalborg Symphony Orchestra. Prior to moving overseas, she was an active freelancer in Philadelphia, performing as a regular musician in the Opera Company of Philadelphia, The Reading Symphony Orchestra, Symphony in C and the Ocean City Pops. She was also active as a teaching artist, working primarily for the Philadelphia Orchestra’s School Partnership Program. Lauren very graciously accepted my invitation to write down some of her thoughts about living and performing outside the U.S., freelance playing, and the life of a professional horn player. She shared some wonderful advice for students, teachers, and professionals alike. Thanks Lauren!

You recently won an audition for the Aalborg Symphony Orchestra in Denmark. Could you talk briefly about your background, and how you arrived in your current position?

Sure! I grew up in central PA, came through a good music program in high school, and ultimately decided to major in music at the University of Delaware, where I studied with Cindy Carr. After that, I got my Master’s Degree from the University of Wisconsin-Madison where I studied with Douglas Hill. After that, I decided to head back east and got a Professional Studies Certificate at Temple University, where I studied with Adam Unsworth (who now teaches at University of Michigan.) After all that, I won a one year position in the Calgary Philharmonic where I met my husband Jeff, who plays the bass. And after a few years of long distance relationship, we got married. Jeff took a sabbatical from his job in Calgary for the 2011-12 orchestra season and we both won positions here in the Aalborg Symphony Orchestra in May 2012.

What was the audition process for this orchestra? How did it compare to the audition system in the United States?

Auditions here are essentially the same as in the United States. There’s a screen, you receive the list ahead of time (although often you don’t receive the excerpt list until 2 weeks beforehand, which is quite different from American orchestras.) There’s a much greater emphasis placed on solo playing here, and there is almost always an accompanist provided at auditions. My first round was the Hermann Neuling Bagatelle for horn and piano. This is a very common piece on low horn auditions in Europe, but we almost never play it in the States. There were no excerpts at all on my first round. The second round was the entire first movement of Mozart 3 (including the cadenza) and one or two excerpts. Then the last round was entirely excerpts.

Actually, if I remember correctly, for the last round they just said “Play everything on the list that you haven’t already played for us, in any order you want.” I remember thinking at the time that I could really get into my own head and start arranging excerpts in the most convenient way, strategizing about which should be first, last, etc. (There were at least 10 excerpts left to play at that point.) But then I had this realization that the best thing to do was just go in order, start to finish. Realistically, if I didn’t know how to play the excerpts, I wasn’t going to trick anyone by playing them in a different order.

Generally, I think the committees are larger here. There were at least ten people on my committee for 4th horn. And principal positions are usually no less than 15 people. One major difference is that our music director has no say in the hiring of musicians here, so he is not even allowed to sit on committees. Of course these things can vary from orchestra to orchestra. I can only speak from my own experiences.

Are there any other differences you’ve noticed performing in an orchestra outside the United States?

Honestly, not really. Orchestras are all basically the same wherever you go. There are small stylistic things that I sometimes think are slightly more “European” but they’re hard to exactly put a finger on. I might have a better answer to this after some more time passes.

Since this is a horn blog, I’ll nerd out for a second here about equipment. There are 8 full time orchestras in Denmark, including the opera orchestra. To the best of my knowledge, there isn’t a single section with a preference toward equipment. In my section, we are a Cornford, Paxman, Lewis, and Hill. We all just play what works best for us, which I think is a valuable piece of advice for horn students: get the equipment that makes you the most comfortable, that works the best, and makes you sound the way you want.

What about major differences between life in Denmark vs. life in the United States?

Well, I’m learning to speak Danish!! That’s sort of fun. We are a very international orchestra, with about half of the orchestra coming from outside of Denmark. And Denmark is a pretty small country, so we rehearse in Danish when we have a Danish conductor. But frankly, that’s probably fewer than 10 weeks a year. So at work, English is mostly the language of rehearsals. Orchestra meetings and correspondence are all in Danish, though. So it’s important to learn it just to keep up with what’s going on and feel like you are a full member of the ensemble.

I just read your interview with Daren Robbins (Part 1 and Part 2) and one thing he said about Thailand really resonated with me as an expat. While Denmark is certainly much more like America than Thailand is, living abroad comes with a lot of challenges. Work permits and immigration, being far from home in a new country… sometimes the smallest thing can turn into a big deal because of small misunderstandings. But if you’re the type of person who likes a challenge and is adventurous, there are a lot of great opportunities in orchestras outside of America.

You also have extensive experience as a freelancer in the Philadelphia area. Do you have any advice for players looking to get into freelance work?

I feel like a lot of people come out of music school expecting that they are going to win a big job in a big orchestra. And the harsh reality is that only a tiny fraction of those people will even come CLOSE to winning a full time orchestra job. So the rest of you are going to have to find a way to make a living making music. A lot of people treat freelancing like a crappy consolation prize, but I really enjoyed freelancing in many ways and miss certain aspects of it.

When you’re a freelancer, you certainly have less stability– you don’t get your schedule ahead of time and sometimes the money can get a little dicey. But you also don’t have to sit next to the same people all the time. You have more control over your schedule. There’s a much wider variety of things you find yourself doing and projects that you find yourself involved with as a freelancer. It can be a lot of driving depending on where you are, and it can be a really tough schedule with few breaks or days off. But keeping a good attitude about it can make all the difference. A few practical pieces of advice:

When you first start out, take EVERYTHING that comes your way. Even if it seems inconsequential, like a church gig that pays $20. You don’t know who you are going to meet at those gigs, and you have to start making connections somewhere. Eventually, as you (hopefully) climb the freelancing ladder, you won’t feel like you have to take everything and you can be more discerning. Every gig is an opportunity to make a good impression, both with your playing and your professionalism.

And speaking of professionalism… My basic rule for those just starting out (and those who’ve been in it for awhile, too!) is “Don’t be annoying.” Here are a few things that are annoying and should be avoided:

Remember, once you’ve blown the chance to show someone that you are prepared and professional, you don’t get that opportunity back.

Know that you can be replaced. No one is obligated to call you, and there is always someone behind you who would be HAPPY for the work.

Check back soon for Part 2!