I have been revisiting some of the excerpt duets I put together a while back (Beethoven 9, Brahms 3, Mendelssohn Nocturne), and decided to try my hand at making a multi-track recording. In other words, I recorded both duet parts separately, and put them together using Audacity, a free, open-source audio editing tool. The first excerpt I tried was the 4th horn solo from Beethoven’s 9th Symphony. Here’s the excerpt duet again, which is created from the original solo and woodwind parts. 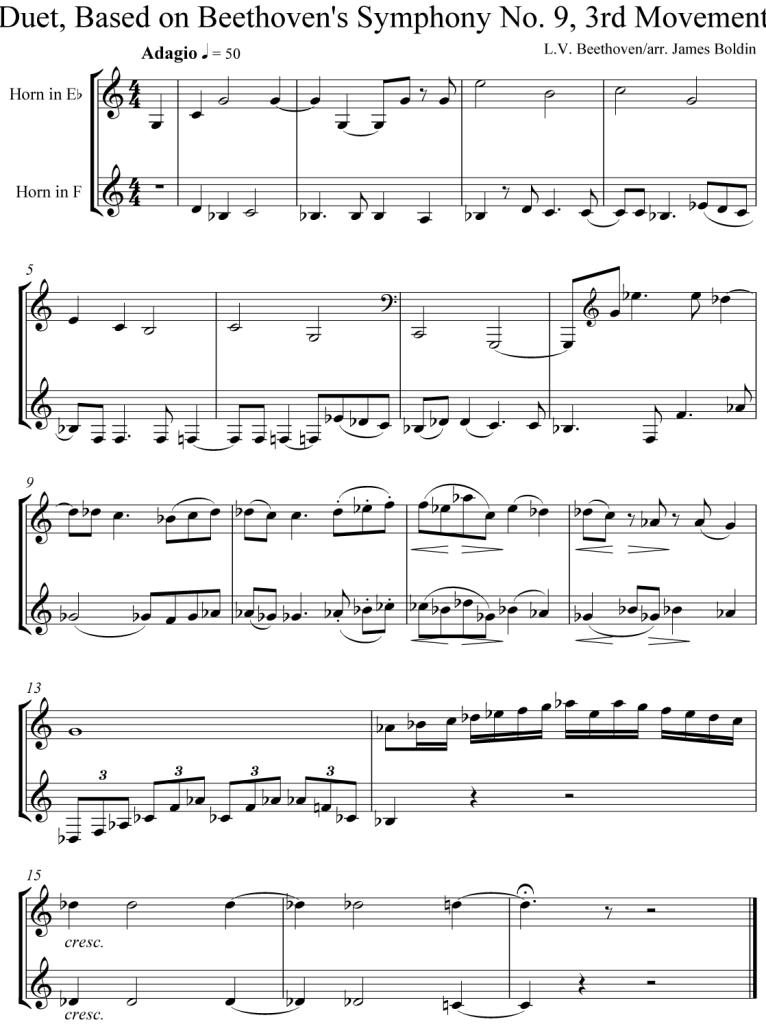 And here’s a recording of the duet, made using an Edirol digital recorder and Audacity. This is a “raw” recording, with little to no editing, other than what was needed to align both parts. The recorder was placed on my music stand, approximately 2-3 feet away.

Looking at this little venture in hindsight, it was not that difficult to align both parts. I used a click-track (metronome with headphones), and copied and pasted both .wav files into the same Audacity project. From there, it was a trial and error process getting the files to begin at exactly the same time (I cut and trimmed, and re-cut and re-trimmed, several times). Once the parts were aligned, I tweaked the balance some using Audacity’s “change volume” plug-in. Without both parts playing simultaneously, it was difficult knowing how loud to play the duo part in order to balance correctly with the solo. There are a few places where the lower voice pokes out too much, but overall it isn’t too bad.  One area that was very difficult to gauge while recording – and impossible to fix in Audacity – was intonation. Again, without the other part playing along with you, it is impossible to temper the intonation exactly. If I try this again in the future with the other duets, I’ll probably play along with a recording of the solo part while recording the duo part. If nothing else, the intonation discrepancies in the recording can serve as an example of how this duet might be used in a lesson situation. Making sure the open intervals (4ths, 5ths, 8vas) are exactly in tune is very important in the first part of this solo.

Thinking in even more practical terms, the multi-track idea would be a great way to practice any duet (or trio or quartet) excerpts in the repertoire, such as Beethoven’s 3rd, 7th, and 8th Symphonies, or the opening of Weber’s Overture to Der Freischütz.  For some expert examples of multi-track recording, have a listen to Richard Chenoweth’s recent CD The Horn in Opera.