This is the second in a three-part series devoted to selections from Kulturgeschichte des Horns (“A Pictorial History of the Horn”) by Kurt Janetzky and Bernhard Brüchle (English translation by Cecilia Baumann).  You can check out the first part here. In this part we’ll be looking at images from the 18th and early 19th centuries.  As in Part 1, simply click on the images to view them up close.

Next is an “Inventionshorn with six couplers by Carl Gottlob Schuster, Neukirchen ca. 1800” (p. 165) 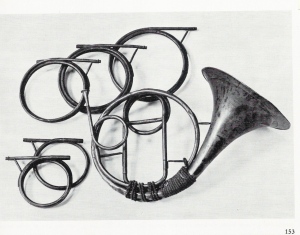 Third is “‘Holding the Horn,’ a lithograph by Pointurier from an anonymous French method book for horn, ca. 1830” (p. 176) It is interesting to note how consistent (roughly) right hand position has remained in the last 180 years.

Duvernoy was one of the most reknowned instrumental soloists of the Paris Opera, as well as professor and first solo hornist at the Conservatory [Plate VIII, between pp. 176-177]

That’s the end of part two.  In part three we’ll wrap things up with some images from the later 19th century,  as well as a review of the book by musicologist Mary Rasmussen.