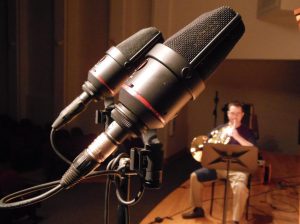 Departing a bit from my previous “Equipment Update” posts, this one is not about horns, mouthpieces, or mutes. Instead it is a basic introduction to recording equipment for the classical musician, with some inexpensive, but functional, recommendations. I’ve owned recording equipment of one kind or another since my undergraduate days, starting with a Sony Minidisc recorder paired with a small Sony microphone, and later upgrading to a variety of handheld audio and video recorders manufactured by Sony, Roland, and Zoom. These were all great devices; portable, easy to use and of high enough quality to use for auditions, recital recordings, and YouTube videos.

Recently, however, I began to wonder if it might be possible to purchase individual components and put together a relatively inexpensive system suitable for live classical recording. I knew from the outset that it was neither feasible nor desirable to purchase the high end gear I’ve seen professional engineers use. My purpose was primarily educational (I teach an Introduction to Music Technology class), though I do plan to use my equipment for some future projects. I’m happy to say that for around $300, I succeeded in finding decent components which get the job done at a level equal to, or better than, the handheld devices listed above. So, what will you need if you want to do the same? Here’s a quick rundown.

So there you have it, a bare-bones but hopefully useful guide to recording equipment for the classical musician. There are so many other great tutorials online that I felt it unnecessary to go into too much depth about any of the various components. Far more knowledgeable contributors have written and recorded excellent demonstrations on a plethora of recording topics. Among my favorites is a series produced by Murray State University. See below for the links:

If you’re a novice like me, it’s perfectly normal to feel overwhelmed by all of the technical information on recording. However, as a 21st-century teacher and performer I felt I owed it to myself and my students to learn something about technology which has become so ubiquitous. It took me a little while to wrap my head around the basics, but now that I have a grasp on them I’m excited to experiment with different microphone setups and other parameters. If you are curious what the gear mentioned above sounds like, here is a rehearsal recording made using it. The excerpt is from the Trio for Horn, Trombone, and Tuba by Frigyes Hidas, which my colleagues and I will be performing this summer at the International Trombone Festival and the International Horn Symposium. It was recorded in a small classroom using a fairly close X/Y pattern microphone setup. So that you can get a clear sense of how the equipment performed, no editing has been done other than trimming the beginning and end of the clip in Audacity. I’m very pleased with how everything worked, and am looking forward to recording with this equipment in our recital hall and other venues.