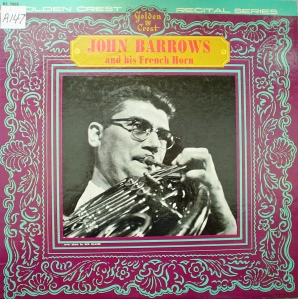 We have a number of classic horn recordings on LP in our music library, one of my favorites being John Barrows and His French Horn, recorded in 1960 (I think) by Golden Crest Records. To my knowledge this LP hasn’t been reissued on CD, although it really should be done.  The album is devoted to the music of Alec Wilder, and includes the First Sonata, Second Sonata, and Suite for Horn and Piano, with Milton Kaye, pianist. These are great recordings, and as close to a definitive interpretation of Wilder’s music as you can probably get. Barrows was a longtime champion of Wilder’s compositions, and they held each other in high esteem. Included on the back of the LP is a written tribute by Wilder praising Barrows for his artistry. Though brief, these paragraphs candidly explain Wilder’s immense respect for Barrows and his horn playing.

I’ve admired John Barrows since the day I met him all those years ago in the Eastman School. Intelligent, intuitive, witty, warm and a marvelous musician. My praise may sound suspect considering that it’s my music he has played so superbly on this record. But I swear that, had he never played a single note of mine, my respect would be the same.

He is the bane of all French Horn players, not only because he plays so brilliantly, but because he seldom, if ever, practices. This, I recall, considerably startled me when, after a rather rocky night, he rose with the dawn, wandered up a side hill with (for some mysterious reason) his horn under his arm and let loose, for the first note of the day, a high concert F. For those of you who aren’t familiar with the instrument, this is the top note of the horn.

The strong, intelligent, extremely sensitive playing of Milton Kaye is totally satisfying to me. And I feel that his extraordinary musical rapport with Mr. Barrows is not only constantly in evidence, but has made greater ease and fluidity possible for Mr. Barrows’ performance.

Mr. Barrows has always been excessively humble about his playing, sometimes becoming darkly depressed by the sounds made by a little known Russian horn player who is known in this country only by his recorded performance of a Gliere concerto. [Valeriy Polekh?]

The soloist, whose name escapes me, is obviously a technical marvel. But what Mr. Barrows cannot seem to comprehend is that the Russian’s capacity to produce subtle, mature, communicative playing is minimal in comparison.

Mr. Barrows is also an extremely talented composer, orchestrator and musicologist. He is an aspiring teacher, a great cook and a sports car enthusiast. He is a member of the New York Woodwind Quintet and the Casals Festival Orchestra. Without him, I promise you, none of the music on this album would have been written nor would dozens of other pieces. His faith in me is one of the few truly beautiful experiences of my life

On Tuesday, August 31 at 7:30pm, pianist Richard Seiler and I will be presenting an international program as part of the Faculty Artist Concert series here at the University of Louisiana at Monroe.  Preparing these works has been a lot of fun, and I’m looking forward to the performance.  In choosing repertoire for this recital I tried to find a balance between pieces I had previously performed and works that were new to me.  At this point in my career I am primarily working on lots of new and/or unfamiliar works as well as going back over some of the repertoire I performed as a college student.  I think having a theme for a recital is a good way to structure things, as it gives both the players and the audience a thread or train of thought to follow for the entire program.  As I mentioned before, this recital is built around an international theme, primarily featuring works for horn and piano by various Europeans and one American.

Alec Wilder (1907-1980) Sonata No.3 for Horn and Piano, edited by John Barrows In his article in The New Grove Dictionary of Music and Musicians, Gunther Schuller describes Alec Wilder as “an ‘unclassifiable’ American original,” and indeed Wilder’s compositions often seem to be balanced perfectly somewhere between popular and art music.  His three sonatas for horn and piano as well as the Suite for Horn and Piano hold a special place in the repertoire, due both to the high quality and uniqueness of the writing as well as the championing of these works by the legendary John Barrows.  I considered a number of American composers to begin the recital, but since I only had room on the program for one American I went with Wilder.  I am familiar with Wilder’s music, but the third sonata was a new one for me.  As with his other horn writing, this sonata is lyrical, jazzy at times, and always idiomatic.

Olivier Messiaen (1908-1992) Appel interstellaire, from Des Canyons aux Etoiles Although Messiaen was a French composer, I chose the “Interstellar Call” because of the various international influences found in it, and because it showcases so many different timbres and technical possibilities on the horn.  For a bit of background on the work, I’ll quote from Daniel Bourgue‘s wonderful collection of essays, Conversations About the Horn, published in 1996 by International Music Diffusion (I.M.D.), and translated into English by Nancy Jordan Fako.

This grand orchestral work was composed between 1971 and 1974. As with many of Messiaen’s compositions, this is a mystical work. Des Canyons aux Etoiles [From the Canyons to the Stars] refers to rising from canyons of the earth up to the stars and beyond to paradise, to the glory of God in all of His creation: the wonders of the earth, the land, the song of birds, the magnificence of both material and spiritual heaven. This is a work of praise and contemplation. It uses only a single horn which plays a long solo entitled “Appel interstellaire” [“Interstellar Call]. This solo was probably the first part of the work that was written. In 1971 composer Jean-Pierre Guezec died prematurely. To pay him tribute, nine French composers, friends, or teachers wrote a collective work composed of short pieces for different solo instruments. This work was entitled Le Tombeau de J.P. Guezec [The Tomb of J.P. Guezec].  The first (and only) performance was given at the 8th Annual Royan Contemporary Music Festival [Royan is a small coastal city near Bordeaux] on April 6, 1971 for a radio broadcast. Olivier Messiaen was one of the nine composers. He decided to write a piece for horn alone, and I was chosen to perform it. p. 89.

The rest of the chapter deals with various performance issues related to the “Interstellar Call”, and I highly recommend it. One other topic that sometimes comes up with this work is that Messiaen did not wish the “Interstellar Call” to be performed or recorded out of context.  I have mixed feelings about this, because while I think it is extremely important to respect the composer’s wishes, realistically the “Interstellar Call” would rarely be heard – if at all – if it were necessary to mount a full performance of Des Canyons aux Etoiles each time a horn player wished to play the work.  Instead I prefer to think of performing it as an orchestral excerpt, and as a way to demonstrate some extended techniques on the horn.  Perhaps the full effect of the piece is lost by performing it out of context, but in my opinion that is better than not hearing it at all.  Numerous other horn soloists have performed and/or recorded the work as an independent solo piece, and I would love to hear other opinions/rationalizations about the subject.

Luigi Cherubini (1760-1842) Sonata No. 2 Representing Italy is this well known sonata by Cherubini, a prominent composer of opera and sacred music in the late eighteenth and early nineteenth centuries.  Written in 1804 as a test piece for the Paris Conservatory, this sonata belongs to a group of two works composed for examination purposes.  I first performed this piece as an undergraduate, and pulling it back out after several years has been great fun.  Perhaps the next time around I’ll work it up on the natural horn, the instrument for which it was originally intended.

Charles Gounod (1818-1893) Six Melodies, edited by Daniel Bourgue Gounod is probably most well known for his lyric opera Faust, along with various other operas, sacred works, and around 200 songs.  Though not a major part of his compositional output, the Six Melodies for Horn and Piano are nevertheless charming, and I think a great way to open the second half of a recital.  Because I didn’t want the recital to get too long, we’ll only be performing the first three melodies.  As you might expect for a composer steeped in opera and song, the writing is very lyrical, along with some clear folk influences.

Franz Strauss (1822-1905) Fantasie, Op. 2 Among the earliest works published by the composer, this quasi theme and variations is very popular on recitals and at horn workshop/symposiums.  Though straightforward harmonically and melodically, the piece  has some very nice lyrical writing as well as some tricky technical passages to work out.  For a number of the technical passages I ended up staying on the B-flat side of the horn quite a bit.  For an excellent recording, check out John Ericson’s CD Les Adieux.

Arnold Cooke (b. 1906) Rondo in B-flat We’ll end the recital with this short work by a British composer.  I like closing programs with a fun, less serious work, and the Rondo fits the bill nicely. This piece, along with the Strauss, Wilder, and Gounod, were new to me for this recital, and I’m glad that they are now in my repertoire.