Recently a reader inquired about my H200 descant horn, which I briefly mentioned in my post on Tools of the Trade. Here’s what I said about the H200 then.

I also own a Holton H200 double descant horn, which I purchased from Douglas Hill.  I was in the market for a descant horn but I didn’t necessarily need (and couldn’t afford) a top of the line instrument, and the Holton fit the bill very nicely.  It is a nice horn at a very reasonable price, and I’ve used it several times over the last few years.  I would like to do more playing on it in the future, particularly Baroque solo works like the Telemann and Förster concertos. My only complaint about the horn is  that the intonation is sometimes a bit quirky, tending towards the sharp side.

I have a few more comments to offer on the horn but first here’s a little background on my experience with descants in general. Until I started graduate school I’d only seen a descant horn up close a handful of times, although I knew that they existed. As a high school student and college undergraduate I had seen and heard a descant horn played by John Ericson – an expert on the topic – during summers at the Brevard Music Center, but didn’t really pursue playing on one myself until starting a masters degree at the University of Wisconsin-Madison. For a semester I worked part time in the School of Music’s instrument repair shop, which, in addition to the normal run of the mill specimens, also had a large collection of interesting horns. Among these were natural horns of the Classical and Baroque variety by Richard Seraphinoff, a few trompes de chasse, a set of four Wagner tubas, and several models of descant horns. The descants included horns by Alexander (single F alto), Hoyer (some type of double descant), and Paxman (pre-85 model 40). I got a chance to play on most of these horns at one time or another, but spent the most time on a Seraphinoff Classical era natural horn and a Paxman descant. At one point I had both the descant and natural horn checked out on loan, which made for an interesting time getting all three horns (double, descant, and natural) into a locker at the same time. My primary use for the descant horn at the time was for some parts in the UW Symphony Orchestra, and for some orchestral excerpts (Bach’s Brandenburg Concerto No. 1, Beethoven Symphony No. 7, etc.), although I also remember working on the Telemann concerto with that instrument as well. It was a great experience, and set up a good foundation for further study on the instrument. 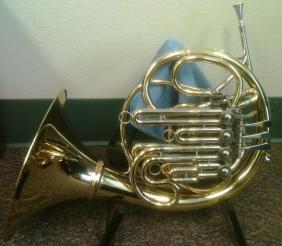 Ok, jump ahead to 2007, when I purchased my H200 second hand from Douglas Hill. The horn was essentially in brand new condition when I bought it, as Doug had only used it for a couple of performances I believe. Since then I’ve used it several times, but as noted in the quote above I plan to program some more solo works that make use of the horn in the future. For anyone new to descant horns it can take some time to get used to making the switch back and forth from your regular double horn. When I first started playing the H200 I didn’t really like it that much – it got the job done, but I felt like I had to continually fight the horn to center notes and to keep the pitch in general down. Over time this has gotten much easier, and I really enjoy playing the horn now. Using a slightly more covered hand position has helped with the intonation, as well as giving the high F side a more mellow tone. I’ve used a couple of different mouthpieces on it, including my normal Laskey 75G, and a Moosewood BD (descant horn model) with a copy of a Laskey 75 rim (pictured above). The valves are pretty good, although the mechanical action can get a little clunky at times.  I’m not really sure why Holton made this design decision; the H200 is based on the pre-85 Paxman model 40, but I don’t remember the Paxman I played on having mechanical linkages except on the change valves. The B-flat side is quite good on this particular horn, and I actually have had an easier time centering notes on it after playing regularly on my Schmid double (as opposed to the Yamaha 667v I played before the Schmid). The high F side is good too, although I remember the Paxman descant I played in school having a really exceptional high F side – it’s hard not to compare the two even now! The stopping valve works very well, although I’ve never used the extra little bit of tubing they include to make the stop valve a B-flat/A valve. Maybe someday I’ll be willing to plunk down the extra cash for a top of the line descant, but for now I’m very happy with the Holton.

By the way, if you are interested in hearing someone perform on the H200, check out the newer European Style Surveys by Dan Phillips on the International Horn Society’s site. The player is Corrado Maria Saglietti,  Principal Horn of the RAI National Symphony Orchestra in Turin. He is playing an H200 with F extension. NB: You must be an IHS member and log in to view the videos.

Awesome, thanks for this. As part of my studies at CSI in Switzerland, the graduate students take a year of descant lessons (we have two older Paxmans) and I have been complimented a number of times about making it sound good… so I thought it might be time to consider adding an instrument to my arsenal to use in pit orchestras and in chamber music. I know of at least 3 professionals that use this in their full-time symphony jobs, so that is encouraging… and the price is not bad either. 🙂

Also, just out of curiosity, do you know what ring is used on the bell flare? Is it Alexander compatible?

Good question! I’m not really sure. It’s not a Schmid ring, and it may not be compatible with anything else either. John Ericson may know, as he had a Lawson flare added I think when he played on an H200.

I remember reading a few years ago that they used to use the Alex ring but when the Conn and the Holton company merged they started to use their own “UMI” ring. I’m a big fan of changing the bell flare to get a different sound… I do it on my double sometimes… so if I ended up getting the H200 it would be nice if I could use some of my flares on it when needed 🙂
(or, assuming the bell is cut at the right place, just switch the ring)

[…] it is a great little instrument, and I am enjoying playing it. I had already planned to use my Holton H200 descant for some upcoming performances, but jumped at the chance to try out one of Paxman’s […]